You don’t have to take a medication for ADHD.  We always suggest patients work on their own and with a coach to improve habits and develop behavioral strategies to combat their inattentive, hyperactive, or impulsive tendencies that are part and parcel of this condition.  That said, we are realists who know how useful medications can be because we have seen it so many times: An adult patient comes to our office and relates a tale about years of struggling with unmedicated (and often undiagnosed) ADHD.  With our help they finally try an ADHD medication.  At their next visit they tell us this has been transformative.  So many times we’ve heard: “If only I had started this medication twenty years ago!!  My whole life would have been different!”

With that in mind, we’ve devoted several blog posts in this series to the stimulant medications that are mainstays of ADHD treatment.  These are methylphenidate, dextroamphetamine and their chemical derivatives: i.e., Ritalin, Adderall, Vyvanse, Focalin, etc.  Stimulant medications are very effective for many ADHDers but have side effects that can be troublesome or even deal-breakers for some – specifically appetite suppression, insomnia, and mood changes.  Are there other medication options?

Yes – there are also nonstimulant medications for ADHD.  There are four, listed alphabetically: atomoxetine (Strattera), bupropion (Wellbutrin), clonidine (Kapvay) and guanfacine (Intuniv).  Of these, three (Strattera, Kapvay, and Intuniv) are FDA-approved for ADHD, meaning their manufacturers went through the laborious and expensive process of putting them through rigorous case versus control studies to statistically prove they are safe and effective for ADHD.  The fourth (bupropion), has not been through this process for ADHD, but there are good reasons to believe it can help, and it is FDA-approved for other behavioral conditions.

Before we break down differences between these four nonstimulant options, let’s first discuss the difference between stimulants and nonstimulants.  This basically boils down to how the medications affect norepinephrine and dopamine (two neurotransmitters in the brain important for ADHD – see our previous blogs “The Dope on Dopamine” and “Norepinephrine, Dopamine’s Less Glamorous Wonder Twin”).  At the simplest level you can think of this as whether the medication acts at the “ON” switch, the “OFF” switch, or somewhere else in the control system for these neurotransmitters.  All stimulant medications act at the “ON” switch:  They cause brain cells to make and release more dopamine and norepinephrine at their communication terminals (synapses).  As you can imagine, this leads to rapid effects on brain circuits that rely on these two neurotransmitters.  This correlates closely with patient experience: ADHDers who respond well to stimulant medications find they work rapidly to “turn on” focus and organizing capacity. 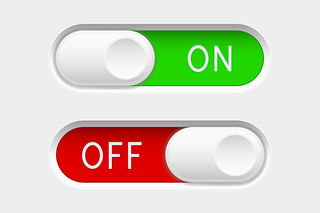 Medications are on and off buttons for synapses

In contrast, you can think of nonstimulants as acting in the dopamine/norepinephrine control system in places other than the “ON” switch.  Like the simulants, two of the nonstimulants (atomoxetine and bupropion) also increase dopamine and norepinephrine at synapses, but they do so in a different way.  Instead of increasing release (the “ON” switch) for these neurotransmitters, these medications interfere with the “OFF” switch.  There is a “sanitation system” that normally removes dopamine and norepinephrine as soon as they have done their job at synapses.  Atomoxetine and bupropion partially interfere with this clean-up process; you could say they put this synapse sanitation system “on strike”.  Because the cleanup is turned down, the neurotransmitters in the synapse stay there longer and build up.  The net result is still an increased amount of these two neurotransmitters at synapses, but the intensity and time-course is different.  Compared to stimulant medications, these nonstimulants lead to more gradual changes in levels of dopamine and norepinephrine, and accordingly to more gradual improvement in ADHD symptoms.

The other two nonstimulants, Kapvay and Intuniv, work in yet another way:  These two medications activate a subset of norepinephrine receivers (alpha-2A receptors) abundantly found in one part of your brain located immediately behind your forehead (the prefrontal cortex).  This part of your brain is important for executive decision-making – that’s a fancy term for “paying attention to what’s important while keeping a lid on distracting impulses”.  While it’s beyond the scope of this blog and isn’t completely understood anyway, activation of alpha-2A receptors by these medications strengthens connections in this part of your brain.  This increases activity in executive decision-making circuits and leads to gradual improvement in some ADHD symptoms.

There are some other differences worth mentioning: Your body is very good at removing stimulant medications – stimulants are out of your body (and brain) within hours of taking them.  Nonstimulants, especially atomoxetine and bupropion, last longer. They build up in your system over a week or so, and if you stop taking them, are removed over a similar amount of time.  This further contributes to the gradual onset (and offset) of their effects.  This too correlates with patient experience: most ADHDers who respond well to atomoxetine or bupropion find they work gradually and subtly (but nonetheless effectively) to improve focus and organizing capacity.

We must add there are some important differences between atomoxetine and bupropion – they are different chemicals and do some different things in the brain.  The only way to really know which might work best for you (or your ADHDer loved one) is to try them out and see.  In terms of side-effects, both can interfere with sleep and reduce appetite a bit (similar to the stimulant medications).  Atomoxetine is more likely to upset the stomach, cause dry mouth or urinary retention, and in some people can cause a worsening of mood.  Bupropion on the other hand is an antidepressant – so it is more likely to improve any low mood issues, but it can cause a feeling of edginess or anxiety in some people.  Interestingly, because it also affects nicotine receptors, bupropion is FDA-approved as a smoking cessation aid.  For some ADHDers that can be a nice side-benefit.

In contrast to atomoxetine and bupropion, the chemical components found in the other two nonstimunants, Kapvay and Intuniv (clonidine and guanfacine), do NOT last a long time – your body is good at getting rid of them, just like the stimulants.  But (unlike stimulants), in order for these medications to work for ADHD, they need to be present in your brain around the clock – so immediate-release forms of these medications are not very useful.  Kapvay and Intuniv (and their generic equivalents) rely on special pill coatings to extend their release in the gut so you only have to take them once a day.  Side effects are similar for both and have to do with their other major medical use as blood pressure medications.  Too high a dose of either one can lower blood pressure excessively, leading to a range of issues from lightheadedness (especially when standing) at the mild end, to fainting spells at the extreme end.  In addition, both of these medications are slightly sedating, and some ADHDers prefer to take them before bed.

In our next blog we will describe an exciting new FDA-approved  non-medication  approach to strengthening ADHD brain circuits:  The first home-based medical device for ADHD is about to hit the market – it uses weak electrical pulses applied to the face to stimulate nerves that lead into the brain –  Stay Tuned!!!