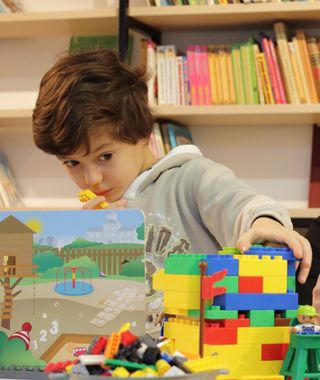 A common scenario in my clinical neuropsychology practice: Jamie’s parents tell me that the school referred him for an ADHD evaluation and that his teachers report he is unfocused and can’t sit still. He starts an assignment and then goes onto something else. He is always talking to others in the class, walks around looking for something to do, and can’t complete his work in a timely fashion. His teachers report that he is easily frustrated, gives up, and has begun to say he feels stupid. He loses focus if something is the least bit challenging, and his teachers think he needs to try harder.

But at home, we don’t think he has ADHD. He can play Minecraft for hours on end and is so focused he often doesn’t hear us when we tell him it’s time for dinner. He sits still without moving and doesn’t want to stop until he’s finished what he is doing. He is also amazing at Minecraft and other games. He loves to show us what he is doing and tells us that he solves many problems while playing his video games. If anything, we are concerned that he is too focused.

My colleagues and I at LearningWorks for Kids and South County Child and Family Consultants have conducted research with more than 500 parents of children with ADHD to explore some of these issues. We have noticed that many kids with a definitive diagnosis of ADHD can very easily stay focused while engaged with screen-based media such as video games, YouTube, and social media. Leading thinkers and researchers on ADHD such as Drs. Russell Barkley, Ned Hallowell, and Thomas Brown minimize issues of inattention, distractibility, and hyperactivity in their descriptions of ADHD, instead of focusing on the impact of poor executive-functioning skills in areas such as organization, time management, planning, working memory, and task persistence as the core features of ADHD. Of particular note is that these experts characterize individuals with ADHD by their inability to sustain attention and effort in activities that do not interest them. Many of these thought leaders describe ADHD as a disorder of intention rather than attention, suggesting that we are less likely to see the symptoms of ADHD in children who are engaged in activities that fully engage them. These activities often involve screen-based technologies such as video games and social media.

In my clinical work, I have found that it is the rare child with ADHD who does not engage with video games and other digital media. It is common for parents whose children are referred for an ADHD evaluation by their school or pediatrician to inform me their children couldn’t have ADHD because they can pay attention to video games all day long. Not only do video games and screens engage kids with ADHD, but they are also the most effective activity in reducing the symptoms of ADHD (as you can see below in our research). Other parents note how readily their children can stay focused on drawing, playing with Legos, computer programming, sports, or creating videos. Sustaining attention and effort is not problematic for children in a variety of activities in which they rarely exhibit the symptoms of ADHD. 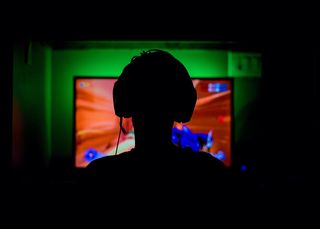 Many children with ADHD will become adults whose attention issues are less problematic when they are engaged with technology in their work, even though issues with executive functioning may remain. Teens and adults with ADHD are often able to overfocus while using technology. The difficulty for many of them is in shifting attention from something that engages them to something that is less engaging. Once parents identify areas (often related to technology) where their kids are fully engaged and attentive, it is important that they think about how they can nudge, foster, and promote these activities in a productive, future-oriented manner.

Our research at LearningWorks for Kids is very compelling in supporting the assertion that kids with ADHD show fewer symptoms of the disorder when they are engaged with technology. In the chart below, low Mean scores indicate less loss of focus, fidgeting, and disorganization. (Interestingly, playing with Legos and blocks is almost as potent for sustained attention as the computer.) 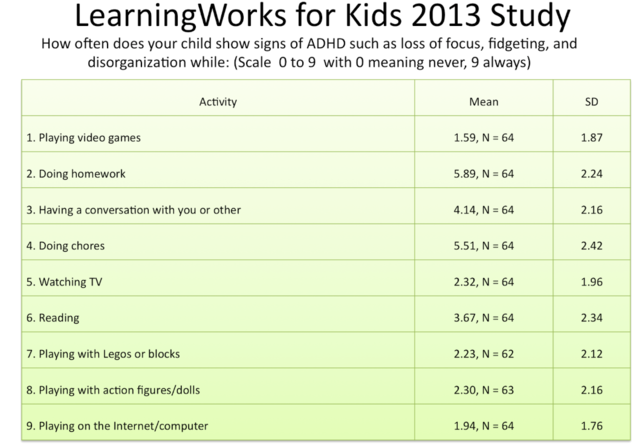 As you view this chart, it becomes evident that when kids with ADHD are engaged in their interests, they don’t look like kids with ADHD. Unfortunately, kids and adults with or without ADHD are often faced with work or obligations they would rather avoid. For those with ADHD, making tasks more interesting through the use of screen-based technology is often very helpful.
My advice to parents is simple: when you begin to notice your children having specific areas of interest in which attention problems are not a concern, nudge them to master these activities to develop an in-depth interest in and knowledge of them. Make it easy for them to expand the scope of these interests and foster learning and expertise in these activities so they can talk knowledgeably about them. If this interest is in the area of video games, help them learn about how games are made and marketed, find out more about the topic as it is presented in the real world, discover what the business model is, and locate other games and activities that might expand their interests. While most kids are unlikely to become video game designers or professional gamers, computer and technology skills are critical in a multitude of professions and emerging fields.