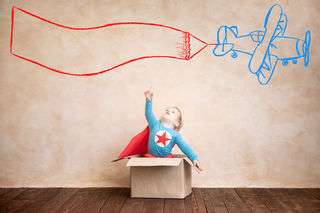 Do you think your child’s diagnosis puts him in a box? Instead, view it as a roadmap to his superpowers. Use it to help him soar!

We’ve all heard the slogans: Don’t put me in a box. Labeling is disabling. And it’s true, diagnostic labels can feel confining. This is the number one objection parents have to psychological evaluations. Whenever a school refers a child for one, the parents are rightfully concerned that the label will become a prognosis, and then a prison.

But what if a diagnosis is less a prison, and more a roadmap? What if the world could learn to relate to diagnoses that way?

I don’t want anyone in Michael’s school to know he has ADHD and High-Functioning Autism Spectrum Disorder. I don’t want them to label him or judge him. I just want him to be treated like everyone else.

Donna is adamant that her son’s diagnosis should not be shared with his teacher.

Humans label. Our brains are uniquely suited to categorizing and sorting. If Michael’s quirky behaviors, tendency to get out of his seat without permission, need to occasionally take long breaks, and poor social pragmatics aren’t explained to his teachers, they’re still going to label him. Those labels will also be confining and self-fulfilling. He’ll be labeled ‘rude’, ‘disrespectful’, ‘oppositional’, and be called a bully. The teachers won’t treat him like everyone else, because he doesn’t act like everyone else, and they don’t have a term for it. So they’ll come up with one. Humans can’t escape labels because humans can’t escape human nature!

When we tell Michael’s teacher that he has High Functioning Autism, we can also explain that his brain doesn’t always get social pragmatics immediately. We can ask her for insight into the social errors Michael is making. Then, we can incorporate that information into Michael’s parenting plan and into Michael’s therapy. If he has a hard time with personal space, his mother can practice that concept with him at home. If he has a hard time using tact, we can teach him the concept of a “social filter” and help him learn what thoughts should be expressed, and which ones should remain private.

If his ADHD keeps him out of his seat, we need a home, school, and therapy plan for that. Michael needs movement and stimulation the way others might need sleep, or food. A certain amount of time without it, and he just can’t function. If a child has chronic low blood sugar due to a medical condition, no sane teacher will stop him from eating a snack in class. The rule might be “no eating during class time,” but obviously, if there’s a medical need for food, an exception is made. Well, Michael has a documented neurological need for movement.

If I ask for an exception, without giving an explanation, the teacher might comply, reluctantly at best, or be uncooperative at worst. Telling her “Michael has ADHD. These are his needs. If we fulfill them, he can be educated in your classroom,” is the best way of getting her onto Team Michael. Humans have an innate need to be successful. Giving Michael’s teacher the tools to help her be successful with him is common sense.

In my Targeted Parenting classes, I teach parents of children with diagnoses to educate their children about their brains. I call it “Educate For Effectiveness.” It’s the “E” in the TARGET System. We want children to understand their own neurology and tendencies, so that they can be effective managers of their own brains. I use the “superhero” analogy to help kids understand their diagnoses. (To read more about hacking your child’s challenges into superpowers, click here.) In every superhero story, there’s always the superpower gone awry, right? A superhero comes into his powers but doesn’t know how to control them. That causes all sorts of problems. Once a wise mentor comes to teach the superhero how to handle his powers, they become his greatest strengths.

Parents can be that wise mentor in the superhero narrative. In the TARGET system, we start with Theory. That’s our theory about this diagnosis, what superpowers it provides, and where the challenges are. (To read more about creating a parenting theory using the TARGET model, click here.) We then move on to understanding our child’s behavior. We need to understand how to predict our children’s behaviors. That’s the “A” of the TARGET system, Antecedent Analysis. (To read more about Antecedent Analysis and how to predict your child’s behavior, click here.)

We also need to understand what reinforces a child’s behavior and causes him to repeat maladaptive behavior, and how to teach more appropriate behavior. That’s the “R” of the TARGET system, Rewards and Reinforcers. We know that behavior that is rewarded is repeated. Our job is to understand what types of rewards to use, so that we can help our children learn. (To read more about Rewards and Reinforcers, and how rewards differ from bribes, click here.)

The GET strategies are what parents “get” out of Targeted Parenting. They are Goal Directed Behavior, Educate For Effectiveness, and Train It In. If you think about our, our children’s diagnoses, their superpowers, are also frequently what gets in the way of their goals. Michael might have the goal of having a good day in school, but his intense curiosity, passion and need for stimulation, or his superpowers, get in the way of that goal. (To read more about working on Goal Directed Behavior, click here.)

We need to educate Michael so he can be an effective manager of his superpower. Rather than seeing his diagnosis as a prognosis or prison, let’s teach him that it’s actually a roadmap to his superpower. Let’s help him learn how to manage his own neurology. Maybe that means teaching him to fidget in place, or some social pragmatics skills. Maybe he needs to take stimulation breaks every so often. The older Michael gets, the more practice he will have with his superpowers, and the more effective he will be at utilizing them. Let’s not be afraid of his labels. Let’s use them to enable instead.