When someone you love has headaches, the only thing you want to do is take those headaches away. Get them out of pain.  See them smile again.  But sometimes “the usuals”—Tylenol and ibuprofen, and even prescription medication—don’t help. The headache doesn’t go away, or it goes away but just keeps coming back, far too often.  Of course, you then take your loved one to the doctor, to make sure they don’t have any bad stuff in their head—no tumors, no aneurysms, no meningitis, sinusitis or any other kind of “itis.”  The doctor tries to figure out what is causing the headache, of course, but surprisingly often, even terrible headaches do not have causes that we can see.   The most common kind of headache that is not caused by other things (not from a tumor, not from an infection, etc.) are migraines.

Many people in this situation get MRI scans to try to figure out the problems, but MRI scans don’t show migraines.  They only show that the headache is not caused by other problems.  Because we don’t have any tools to show that a headache is a migraine, it’s a really frustrating situation.  Someone you love says they feel awful, but migraines can’t be measured, seen, or independently documented.  Everyone involved gets very frustrated, and sometimes suspicious.  Is this person really in pain? What about if someone has migraines so often they wind up staying home all the time? This kind of situation destroys lives and families.

So what do you do?

Sarah’s had a couple of patients try to find exorcists.  No go.

A better way out is to broadly consider all components that could lead to a person having migraines, to try to address the causes.  And one very underappreciated component is ADHD.

How does ADHD lead to migraines? And why? …And why haven’t I heard this before?

ADHD is a very underappreciated cause of migraines.  Part of the reason is that doctors who specialize in headache management are usually not the same doctors who specialize in ADHD.  You go to a neurologist for your headaches, but most neurologists do not also manage ADHD (Sarah being an exception).  There has also been very little academic study or papers written about the coexistence of these two very common and sometimes overlapping neurobehavioral conditions.

There are some interesting findings in the few studies that have been published, however. One is that dopamine is involved in migraines as well as in ADHD.   Many people know that ADHD involves the dopaminergic pathways of the brain.  Fewer people know that migraine symptoms can be provoked by the stimulation of dopamine receptors, and that some drugs that are active on dopamine receptors are effective migraine treatments.  Additionally, compared to people without migraines, people who suffer from recurrent migraines may respond differently to some drugs affecting the brain’s dopamine system.

ADHD medications, particularly stimulant medications, can cause migraine symptoms for some people.  In some patients, this seems to be a direct effect of the drug.  In others, the stimulants can cause lack of appetite as a side effect, and this leads secondarily to increased frequency of migraine headaches  triggered by not eating.  However, even for those not on medication, ADHD is associated with migraines. Some of this may be from ADHD leading to difficulty concentrating leading to stress/anxiety triggering migraines.  But there may be common biological factors involved.

Some genetic studies have linked ADHD to migraine, and as genetic studies become more refined, it is likely this link will become clearer in the future..  Both ADHD and migraine also share genetic links to anxiety, depression, and other mood disorders, suggesting shared biological causes. 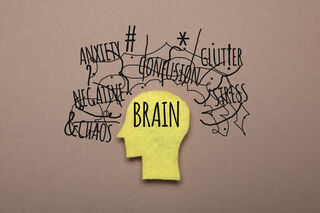 And then there is the matter of concussions.  People with ADHD tend to have more concussions, likely due to more impulsive and risk-taking behavior.  So whenever a patient comes in with a concussion, the doctor should think about whether ADHD could have been a predisposing factor.  Instead, most doctors attribute any difficulty concentrating after the concussion to the concussion itself – that is, they may assume that an “attention deficit” was caused by the concussion, whereas the opposite may actually be the case!  Only a careful history can separate these two possibilities by establishing whether ADHD symptoms were there before the concussion occurred.

To make matters even more complicated, the presence of ADHD can also influence the symptoms resulting from a concussion.  Studies have shown that students with pre-existing ADHD report a higher amount of post-concussion symptoms.  This makes some sense: Headaches are one of the most common symptoms of concussion, but another common symptom is difficulty with concentration (ie, attention).

So to return to the original question: When someone you love has a headache, what should you do? Think carefully about all the factors that could be involved.  Know that ADHD can be a contributor to the headache, and bring up with the doctor whether treating co-existing ADHD might improve headache symptoms.  There’s a chance it could be the factor that makes a big difference!