I’ve written in the past about the emergence of ADHD in the late 1950s, as well as the role of food additives and other environmental factors in making kids more hyperactive.  But what kind of kids concerned psychiatrists, pediatricians, and other child specialists before then?  The very opposite kind of kid.

We can get a glimpse into the type of kid that concerned child experts during the nineteenth century in the work of Mark Twain. 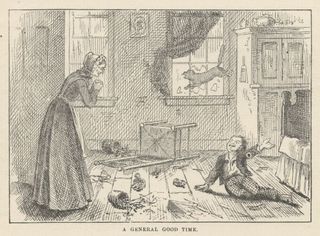 Tom Sawyer having a good time

Tom Sawyer and Huckleberry Finn would probably be diagnosed with ADHD today, but back in 1876, those ADHD characteristics made them the heroes in Mark Twain’s The Adventures of Tom Sawyer.  Instead, it is a completely different kind of boy who is seen as problematic: a German boy in Tom’s school, who studies too much.  The boy over-exerts himself trying to win a bible recitation contest (the prize is a new bible) and effectively has a breakdown, “a grievous misfortune for the school.”

In addition to being on the lookout for students who studied too much, child experts also warned that shy, nervous, withdrawn, and inactive children were at risk of mental illness (masturbation was also thought to be highly dangerous, but that is another blog altogether!).  Children who did not spend enough time exercising in the great outdoors were particularly vulnerable.  This was the time, of course, when school attendance was becoming mandatory in many countries.   But, while a more educated population was desirable, the need for robust, physically fit males to fight in wars and fuel industrial development was paramount.  When British soldiers returned from fighting the Boer War, politicians were more concerned that their soldiers appeared to be far less fit than the Boers than they were about any gaps in military technology.

Concern about nervous children continued leading up to the Second World War and were fueled by the emergence of psychoanalysis and the prevalence of the mental hygiene and child guidance movements.  While psychoanalysts looked to unresolved childhood conflicts to explain adult neuroses, child guidance experts and mental hygienists were eager to root out the causes of mental illness in a bid to create a more mentally healthy society. The title of the short-lived journal The Nervous Child (1941-1956) demonstrated just how prevalent concerns about “nervous” children were during this period.

In 1957, and the launch of Sputnik, concerns about America losing its lead in the Space Race led to hyperactive children to replace nervous children as the primary concern of child experts.  Looking back, it is quite the shift in priority, but by looking at the broader historical context, we can understand why it occurred.  By the late 1950s, brain had replaced brawn as the key to America’s success.  Those who couldn’t make the grade (literally) were soon singled out, their scholastic shortcomings laid bare.  If we keep this idea in mind – that broader social and political factors have a major bearing on how we interpret childhood behavior and mental health – perhaps it is easier to be a little more forgiving of our children, whatever their characteristics may be.