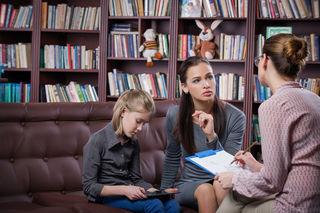 For mental health specialists in clinical practice, diagnosis is challenging. Defining a predetermined categorization that fits presenting behavioral manifestations of pathology can be a struggle even for the expert clinician.

While I no longer work in a clinical setting as a school psychologist, I repeatedly overhear comments from parents that suggest fundamental misconceptions about psychological diagnosis and educational classification.

“My kid had the autism test,” a parent will report on a social media page.

“Oh, just take him to the pediatrician to get an ADHD exam,” suggests another (well-meaning) parent.

“She tested negative for dyslexia,” declares a teacher.

Conceptualizing diagnoses of psychological disorders as a dichotomy, that is, the presence or absence of disorder, seems logical based on the way psychology is presented in the media. But is it accurate?

Outside of school settings, the sacred text of diagnosis for the vast majority of mental health providers in the U.S. is the Diagnostic and Statistical Manual of Mental Disorders, now in its 5th Edition (DSM-5).

Within school settings, qualification for specialized educational services is determined by examining 13 categories of eligibility. These categories are closely related to the DSM-5 categories. A student may or may not be eligible for specialized instruction, even in the presence of a diagnosed DSM-5 disorder, depending upon the measured educational impact of the disorder.

A Brief History of the DSM

In 1918, a manual called the Statistical Manual for the Use of Institutions for the Insane was published as the first attempt at the categorization of mental disorders in the United States.

Published by the American Psychiatric Association in 1952, the first DSM evolved into a manual that was the precursor for the current DSM-5. The DSM has grown from 102 diagnostic categories to almost 300 in DSM-5.

So, how do psychiatrists determine what constitutes a disorder?

Highly qualified psychiatrists make the determinations via committees. Dr. Gary Greenberg, a critic of the DSM-5, described the process:

“The DSM is created by a group of committees. It’s a bureaucratic process. In place of scientific findings, the DSM uses expert consensus to determine what mental disorders exist and how you can recognize them. Disorders come into the book the same way a law becomes part of the book of statutes. People suggest it, discuss it, and vote on it.”

While there is nothing inherently wrong with experts deciding on what constitutes disorder, it is often surprising for parents to learn this process.

A Brief History of IDEA

The educational classifications of the Individuals with Disabilities in Education Act grew out of Public Law 94-142 (1975), which guarantees access to a free appropriate public education (FAPE) in the least restrictive environment (LRE) to every child with a disability.

Eligibility processes vary between states and school districts, but identification for eligibility is typically based on a committee determining qualification for one of the 13 categories.

Diagnosis of disorder or educational classification requires a high degree of professional judgment by a clinician or school team. There is no one autism, ADHD, or dyslexia test. Evaluations for complex psychological disorders are multi-faceted often including direct psychoeducational testing, behavioral observations, and rating scales. The results of the formalized evaluation and observations are then combined with the clinician’s or multidisciplinary team’s expertise to determine diagnosis or eligibility. These judgments can be different based on the clinician or school team. In some cases, differing cutoffs for school-based categories can mean a student found eligible in one state will no longer qualify for services in another state.

To what extent do the categories themselves contribute to effective treatment plans? Often, it appears that the diagnoses do not aid clinical practice. Many mental health experts are calling for a focus on presenting behavioral symptoms, rather than diagnostic category, to enhance interventions for those in psychological distress. Temple Grandin provides an excellent description of the “label-locked thinking” that emphasizes diagnoses rather than treatment options. (She specifically illustrates why this is problematic in terms of autism.)

A New Explanation of Psychological Disorder

Behavioral genetics is on the frontier of psychology. The accumulation of information is rapidly progressing and, notably, the results of studies appear to be replicating robustly, with all tested psychological variables showing genetic influence.

While there is evidence for single gene identification for certain medical disorders, like Phenylketonuria, current information from behavioral genetics suggests that, for psychological disorders, the underlying genetic influences are more complicated.

Genome-wide association studies (GWAS) are demonstrating that the heritability of complex psychological disorders is likely due to many small genetic variations—single nucleotide polymorphisms (SNPs)—of negligible effect.

GWAS studies suggest that most psychological disorders are quantitative increases in normal genetic variations. From these polymorphisms, behavioral geneticists are calculating polygenic risk scores to determine who may be at highest risk for specific disorders. Robert Plomin describes what this means:

“The normal distribution of polygenic scores suggests that what we call disorders are the quantitative extreme of the same genetic factors that affect the rest of the distribution. Stated more provocatively, there are no common disorders, just quantitative traits—the abnormal is normal.”

In his book Blueprint, Plomin suggests that the distinction between normal and abnormal is artificial and changes regarding treatment approaches should include reconceptualizing the idea that we can cure a disorder, since there is no “disorder” as we typically understand it. Treatment should be focused on the degree to which a problem is improved. Plomin further indicates that the DSM-5 seems to be moving toward slow alignment with the behavioral genetic research as some disorders, like autism, are now conceptualized as dimensional.

For parents concerned about how to meet the needs of a child struggling in an academic, behavioral, social, or emotional domain, a greater understanding of diagnosis and school-based eligibility is needed. Too often, parents are left confused by changes in their child’s diagnosis or category of eligibility. Clinicians should help parents clearly understand the process.

Also, the focus should be on the development of interventions for the individual child, not just on diagnosis and eligibility. Determining what is in the best interest of our struggling kids—guided by science—should encourage parents and clinicians to advocate for changes.

Finally, the progress of behavioral genetics is promising for a more scientific understanding of what contributes to our psychological differences. Polygenic risk scores may eventually be used to help target interventions or provide support before the manifestation of a disorder. This is an extremely encouraging prospect.