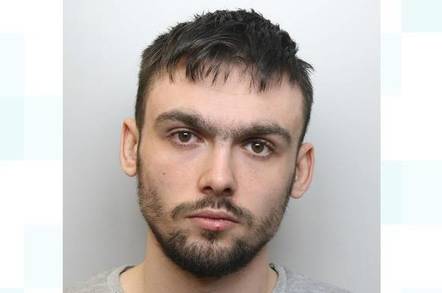 A young man who DoSed two British police forces’ websites has been sentenced to 16 months in a young offenders’ institution.

Liam Reece Watts was jailed at Chester Crown Court earlier this week after DoSing Cheshire Police and Greater Manchester Police’s public-facing websites as revenge for being convicted of carrying out a bomb hoax just days after the Manchester Arena mass murder.

Both forces’ websites went down for around a day during each denial-of-service attack.

Watts, who was 19 at the time of his misdeeds, was caught after directly taunting police through Twitter using the handle Synic. Cheshire Police traced his account and arrested him at home on 26 March and Watts pleaded guilty a month later to two charges under the Computer Misuse Act.

One of his tweets reportedly said: “@Cheshirepolice want to send me to prison for a bomb hoax I never did, here you f****** go, here is what I’m guilty of.”

A SYN flood is a type of DoS attack that consists of overloading a target server by bombarding it with SYN requests. Watts’ Twitter alias may have been a reference to this mischief.

CPS prosecutor Chris Taylor told Judge Patrick Thompson at Watts’ sentencing hearing on Monday that the perpetrator had also been convicted of a Computer Misuse Act offence back in 2016 after DoSing his college. The Press Association newswire reported (via ITV News) that Watts’ lawyer, Patrick Williamson, said his client suffered from ADHD and “alcohol-related neurodevelopment disorder”.

Watts also has a criminal conviction for attempted robbery, as well as the bomb hoax, which was carried out in Warrington, Cheshire.

Ursula Doyle, a specialist prosecutor working for the Crown Prosecution Service’s Merseyside branch, said: “Watts appears to have been motivated by revenge for a previous conviction, but in fact the people who were primarily inconvenienced were the thousands of members of the public who use the websites to contact police, or access the websites for help: that service was temporarily disabled.”

20-year-old Watts, of Stratford Road, Chorley, Lancashire, pleaded guilty to two charges brought under section 3(2)(b) of the Computer Misuse Act 1990, having set out to “prevent or hinder access to any program or data held in any computer”. He was sentenced to 16 months in a young offenders’ institution, handed a five-year restraining order to stop him from deleting his browsing history and to allow police to trawl through it on demand, and forfeited his computers for destruction. He was also handed a victim surcharge tax of £140.

Detective Sergeant Chris Maddocks of Cheshire Police’s cybercrime unit said in a statement that he hoped the sentence “will act as a warning to anyone who would engage in this type of behaviour online”. ®

Sponsored: Reboot your Future – Practical Steps to the Cloud